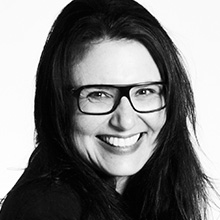 Sabine Seymour, Ph.D., Founder, and CEO of SUPA, is an award-winning serial entrepreneur, researcher, and author of three books on the topic of fashion + technology. She built a helmet as a game controller in 1996 and the first biometric base layer for snowboarding in 2000.

Sabine has received numerous grants and awards including the Michael Kalil Endowment for Smart Design Fellowship. She is an acclaimed public speaker at conferences like SXSW, TEDx, Ars Electronica and invited by Disney, Autodesk, NASA to present as a domain expert. She serves as a board member and startup adviser focusing on Artificial Intelligence and wearable/fashiontech. She has been featured in Wired, Vogue, Forbes, Wall Street Journal, New York Times.

Sabine previously led the research project Computational Cellulose at Aalto University in Helsinki, curated the acclaimed Fashion Lab at the Museum of Applied Arts in Vienna, chaired the Rockefeller Foundation Grant funded project Computational Fashion at Eyebeam and was the inaugural professor of Fashionable Technology at Parsons School for Design in New York.